Most people tend to think of Japan as being sealed from the rest of the world until Commander Perry’s famous gunboat diplomacy of 1854. This is true in the main but there are notable examples of Dutch fraternisation prior to the reforms that led to Japan’s sudden expansion in the late nineteen hundreds. Evidence of this is especially apparent in the work  of Utagawa Kuniyoshi.

It is known from contemporary accounts that Kuniyoshi owned a large collection of predominantly Dutch engravings, presumably acquired from traders and merchants. An anecdote from the 1894 book, Biographies of Floating World Artists of the Utagawa School recounts a friend visiting Kuniyoshi and during their conversation, reaching into a box to reveal several hundred Western images he had collected, including illustrated newspapers. The friend asked Kuniyoshi where he had obtained them but with no response.

Perhaps the most famous example of Kuniyoshi’s fascination with western art is from his print of Act 11 of the Treasury of the Loyal Retainers of the 1830’s. Katsumori Noriko has identified the source of this print as being from a 1632 volume of engravings by Jan Nieuhof a Dutch artist. The debt to the earlier composition is obvious and hardly needs stating. Less obvious perhaps is a debt, currently unacknowledged that Kuniyoshi must have had to Italian Renaissance artists for his innovations in the design of musha-e or warrior and battle scene triptychs. 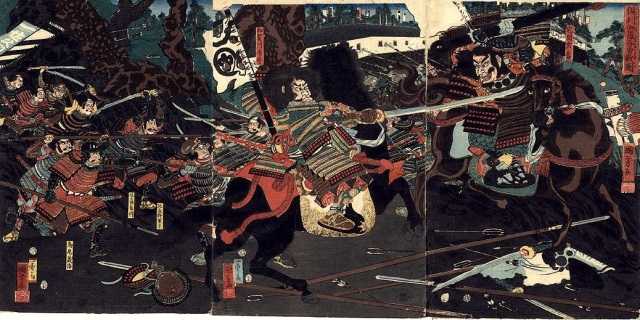 In the print The Battle of Shizu-ga-mine of 1856 Kuniyoshi employs many of the pictorial devices favoured by emerging Italian artists of the sixteenth century. Comparing this print with the famous painting of the Battle of San Romano by Paolo Uccello of 1440, certain stylistic and technical innovations become immediately apparent. Unmistakably, Kuniyoshi has borrowed Uccello’s device of littering the foreground of the image with geometric devices in the form of circular helmets and a network of broken lances. Pictorially, for both artists, this slightly crude method opens up the foreground of the picture to enable the creation of a three dimensional stage in which to place the principle subjects; in this case the large horses and riders that fill the composition.

Notice too how the backgrounds of both pictures employ almost identical snaking designs to attempt a convincing illusion of recession. In the Uccello these are field boundaries and in the Kuniyoshi the lines of a roofed building. Again both artists use a screen of forest vegetation as a middle ground backdrop dividing the picture into three distinct planes.

Aside from these technical devices, the stylistic handling of the subject and incidental detail – the torn pennants, the rhythm of lances, the forward movement, the out-thrust arm – make it hard not to credit Uccello with the genesis of this design and many similar musha-e, not only of Kuniyoshi but also the many of his pupils and imitators that followed him throughout the nineteenth century.

Compare this to another Kuniyoshi print, Horio Yoshiharu Wrestling a Giant Boar, 1847-1850. Here Kuniyoshi uses the more traditional, flatter space of Japanese tradition. The composition is less cluttered, the setting more theatrical. In this beautiful design the figures and that of the giant boar, are distributed according to the needs of the design rather than to create illusion or narrative. Hence the figure of Yoshiharu is given plenty of space, his gesture is dynamic, although still owing something to a European model. The boar is flung into the corner of the composition and the landscape is rendered in flat layers like a kabuki stage set or traditional screen.

Horio Yoshiharu Wrestling a Giant Boar will be featured in our forthcoming show of Japanese Warrior prints, at the end of the month. The print is currently available at Toshidama Gallery for £1120.