Yoshimori, Painting and Calligraphy from the 53 Stations of the Tokaido – Distant View of Yokohama and Kanagawa

There is a curious story concerning the electrification of Japan and the introduction of the earliest telegraphic service in Japan in 1869. The story neatly shows the clash of the old, traditional values and superstitions and the resistance that many, especially rural people had to the new progressive government in the 1860’s following the Meiji revolution.

The first telegraphic communication wire was installed in 1869 for a distance of about 800m between Yokohama Electric Light Office and Yokohama Courthouse. Telegraphic wire was then installed between Tokyo and Yokohama in December of the same year. In February of 1873, the wire was extended from Tokyo to Nagasaki. The print to the left must be one of the first representations of a telegraph pole in a work of art (running down the right-hand side of the image). Problems arose when the lines were extended to the rural areas of the country. Serious complaints were made by farmers and peasants that they were being disturbed – sometimes several times a night – by foxes banging on their doors delivering false messages and telegrams. This is a perfect example of how superstitions can be used to explain technological change or else to confront it.

Some years ago I lived in a small village in England called Box, home to what had once been the longest railway tunnel in the world, running under the village and through a large hill. During its construction in the 1830’s, there were local riots and disturbances because the villagers thought that the tunnel would penetrate hell and release the devil and his demons. To this day it is still sometimes known as the Devil’s Device. 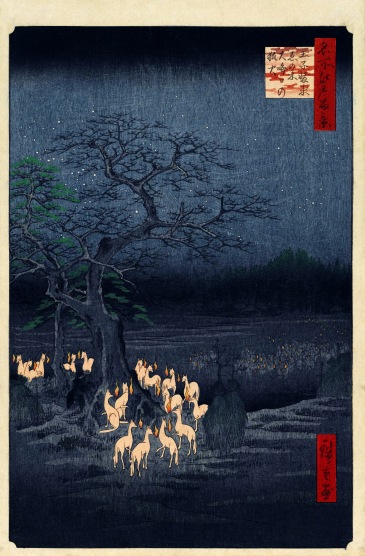 Why did the people of Japan think that foxes of all things would wake them at night with prank calls? The fox has for centuries been a powerful symbol of Japanese superstition and folklore. In Japan the fox is called Kitsune and for centuries they have been depicted as pranksters; intelligent beings with magical powers whose abilities increase with age and wisdom. Notably, foxes are believed to have the ability to assume human form, placing a reed or leaf over its head to do so. It was commonly believed that any woman encountered alone at night was likely to be a fox (although this perhaps says more about Japanese male anxieties about women than it does about foxes). In Japanese woodblock prints, it is not uncommon to see women portrayed with fox traits revealed via a shadow of a tail or a fox mask or in the reflection of a mirror. Like all pre-modern cultures, the Japanese used the supernatural and folklore to explain anxiety, difference, fear or the unknown. Singular to the Japanese fox myth is its acquiring of many tails. Again, the ukiyo-e of foxes frequently depict them as having as many as nine tails – the maximum number a fox may attain through age and wisdom. It was also widely believed that foxes could generate fire and this is widely represented in woodblock prints. Small wisps of illumination called kitsune-bi or ‘fox fires’ appear over hundreds of ukiyo-e prints, most famously the hugely valuable print by Hiroshige, New Year’s Eve Foxfires at the Changing Tree: Oji from One Hundred Famous views of Edo 1857. Here we see a gathering of foxes beneath a tree at night each one with a small lighter like flame next to it. 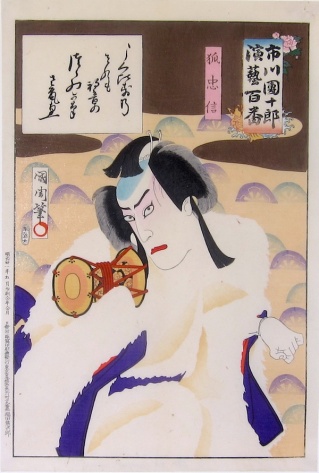 Kunichika, Twenty-four Examples of the Meiji Restoration – The Western Umbrella

Returning to the fox and the modern telegram, mistrust and anxiety were the common reactions of all Japanese people during the convulsive years of the 1860’s. Japan had been isolated from the modernising world for centuries and within a few years had been effectively invaded by American gunboats, bringing with them the new technologies of the modern world. Steam trains, paddle steamers, iron ships, printed books, umbrellas and large numbers of strangely dressed foreigners descended on the free port of Yokohama. Many people reacted with fear and suspicion and sometimes violence. Telegraphic communication arrived in the 2nd year of the Meiji era (1869)  and  the telegraphic wire between Yokohama Electric Light Office and Yokohama Courthouse was installed by a hired foreign national, Gilbert and spread swiftly throughout the rest of Japan. The response to this invasion evoked dismay in some quarters. The fox was believed to be hugely skillful at impersonation, and the anonymous nature of telegraphic and telephonic communication made the superstitions extremely plausible. Like the fox legends of folklore, the author of a telegram always speaks through the lips of another person, raising doubts about identity, as well as the authenticity of the message itself. We see in the strains created by the rapid influx of new technologies a classic case  of the application of customary images to changed circumstances.

Even today this echo of superstition persists at the heart of Japanese telephone etiquette. In Japan a telephone conversation opens with what is called moshi moshi (“say say”), a kind of ritualised greeting. It was believed that it was impossible for the fox to pronounce the words moshi moshi, thereby proving that the person on the other end of the line was in fact the person they claimed to be and not a vulpine prankster.