The Andon – There is a Light That Never Goes Out

There are lots of things that appear in Japanese prints which we pass over without comment or surprise. Ukiyo prints are very particular in their setting, both in contemporary scenes and in historical prints where (without the internet) artists were very concerned about detailed research and historical accuracy. Of course there are anachronisms, which with better research tools it is easy now to spot, but overall artists did a good job of checking their facts and making realistic settings for a presumably critical  audience.

An object which makes frequent appearances in ukiyo prints is the andon, a wood and paper lantern that became popular in the Edo period and is may be responsible for more fatalities than any other single object including the samurai sword. Andon is merely the Japanese word for lantern but it is associated, (especially in the west) with a particular form of square, rigid, timber and paper construction of great elegance. The typical andon makes its appearance in ukiyo-e of the mid Edo period, as in the illustration at the top of the page of a woodblock print by Kuniyoshi. The print shows Sano Jirozaemon who is disfigured with smallpox.  He is bequeathed a magic sword that will bring him good luck as long as it remains sheathed. As a result he prospers and becomes a successful businessman, falling in love with a prostitute, Yatsuhashi who returns his affections but leaves him for a former lover. Enraged, he pursues her and kills her; he is in turn pursued by the authorities but manages to also kill his rival before surrendering. Kuniyoshi shows Jirozaemon ready to strike the final blow and Yatsuhashi crawling away behind the raised and bloodstained lamp. It’s a good illustration of an andon; we can clearly see the portable carrying handle, the translucent paper screen that diffuses the light  and the sliding shelf that holds a shallow dish filled with oil (usually rape seed oil, although sardine oil was also used). This shelf is positioned high up in the body of the frame to maximise the light; the base holds a concealed drawer to carry spare oil and wicks and occasionally a tray called an aburazara designed to catch drips. 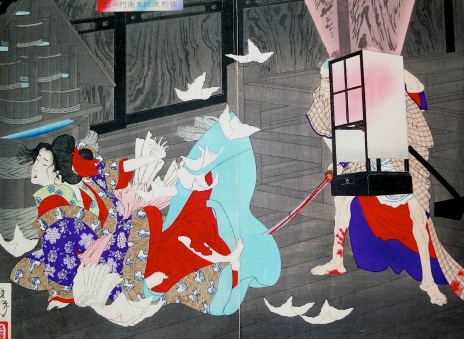 The outstanding feature of the andon is its portability. Noted for their elegance and restrained design, they were developed in the early edo where interiors were sparsely furnished and the few objects that there were all conformed to a certain design aesthetic. The paper shades were very probably a development of the shoji: paper lined sliding doors that allowed diffused sunlight to enter rooms during the day. The type illustrated here is a kaku-andon, the commonest, portable version. Maru-andon, popular in Osaka were cylindrical versions and there were smaller versions, like bedside lights that were called ariake-andon or daybreak lanterns. Yoshitoshi borrowed the device of the lantern and much else in his own version of the story of Jirozaemon illustrated above.

Lanterns – light, shadow, silhouette – these had superstitious meaning to the Edo Japanese. Ghosts and demons were commonly thought to be revealed by a cast light, a shadow or a shape seen through a shade or a shoji. The illustration above left of a print by Kunichika of the cat demon of Okazaki illustrates how the hand of the demon is revealed as a paw by the paper shade of a kaku-andon and the print of the geisha Otoyo (above right), possessed by the spirit of a vampire cat shows the same relationship, this time drawn in the shadow of a sliding shoji, thrown by a hanging andon.  The andon is used to great effect in the print of the 24 Paragons of Filial Piety by Chikanobu.  In this case a beautiful example of a high quality lantern is shown being held by a faithless wife in the act of profaning the statue of her mother-in-law. The supernatural subject matter and eerie setting is heightened by the storm outside and the light cast by the portable andon.

Of course there were no real demons exposed by the ghostly light of these shadow makers, but there were countless tragedies caused by the careless use of andon. The structures were tall, top heavy and fragile. The construction of thin, dry wood and lacquered paper, tinder dry, were highly flammable as were the traditional timber houses of old Edo. Devastating fire was commonplace throughout the city, even despite the highly organised guilds of firemen, watch towers and alarm bells. There were 1798 recorded major fires in 267 years, 49 of which levelled all or parts of the city (still known as City of Fires). It is not known how many of these were caused by the spilling of lanterns, but it is a reasonable guess that many people died as a result of these elegant paper lanterns.