Art is of course a great communicator… for centuries it was the great communicator. It still is, but reading a piece of (contemporary) art these days leads to considerable discussion and anger, (judging by newspaper columns) and yet works of art from other cultures and works of art from previous centuries can be equally obscure, yet no one seems to mind so much. In old master paintings, people are happy to admire craft and skill, and in tribal art where there isn’t very much skill, perhaps people are attracted by other, abstract qualities. But in contemporary art there is a terrible feeling among viewers that they’re being left out or ‘conned’ and this seems to make them very, very upset.

In traditional Japanese art there is a similar opacity of meaning, especially to  contemporary western audiences. Of course the great prints of the Edo period also have, to us, great beauty… but much of what was attractive or exciting about these works is lost to us now. What we see and admire, is perhaps what we are used to admiring in modern western painting and design because so much of that aesthetic has its roots in Japanese culture.

The picture at the top of this page is of a beautiful woman – possibly a geisha in traditional costume… except it isn’t that at all. It’s of a middle aged man, playing a female character on the kabuki stage in a play from around 1850 performed in Edo, now Tokyo. In a sense it isn’t that either, because unless we read the kanji, the portrait is not set on the stage and is neither a representation of the actor, Bando Mitsugoro V nor the fictional character Shindo Saemon’s daughter Yushide but a strange compression of the two. Actor as character. To anyone other than a specialist, the meaning and the subject is completely lost. All this from a straightforward picture of an actor.

The problem becomes more acute with a large genre of Japanese prints called mitate. In the print to the right, the figure of the actor Sawamura Tossho II  is depicted against a checked background and in front of a lantern. This print is a mitate – a picture that uses many layers of meaning to impart different stories, often from different times, to create an additional allusion. In this case, the obvious subject of the picture is a portrait of a popular kabuki actor. To the initiated, it is also an allusion to an historical character called Benkei,  a samurai monk from the middle ages who became popular with young men of the mid-nineteenth century. These young men adopted a dress of broad checked cloth called Benkei-jima – hence the bold pattern of the background. In this print the paper lantern is decorated with a view of Midera temple. In one story, Benkei steals the temple bell and takes it to the top of a mountain. The bell only sounds “I want to return to Midera” and so Benkei returns the bell to the temple precinct. A portion of the bell is printed on the fan that Tossho is holding and is signed Chikamasa, one of Kunichika’s pupils. The title of this series of prints, Benkei Fashions Parodied, implies a critique of popular fashions among tough young Edo men.  This is a relatively straightforward and easy to read mitate – a popular actor in the pose of a street tough, referencing the legend of Benkei through the common use of the checked material. Many others were densely packed with historical reference and knowing jokes – many of the references known only to the coterie of enthusiasts who commissioned the print. To us in the west, these prints are more or less meaningless without specialist knowledge. 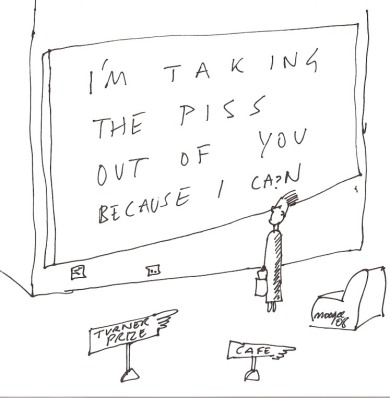 In contemporary art there exists a near identical dialogue – one which leads to a great deal of rancour and angry comments in newspapers and journals. There is no record of the population of Edo being angered by the production of mitate – quite the reverse in fact. This is because ukiyo-e (woodblock prints) were a genuinely popular art form, one that at times of political unease, was both quietly seditious and entertaining. The hidden language of the prints was a technique for the avoidance of censorship. Contemporary art on the other hand, whilst using similar techniques to mitate, uses specialist language to restrict its audience rather than to critique the state. The ukiyo print is a record of popular chatter – sealed up in visual puns that with a little effort, we can still read today. The language of contemporary art is a dialogue designed to exclude the majority in order to create a specialism out of arch critiques of popular social mores.

The Tate Gallery in Great Britain offers this description of the work of the successful Britart artist Sarah Lucas: Lucas makes sculptures from a heterogeneous and unexpected range of everyday materials, such as worn furniture, clothing, fruit, vegetables, newspapers, cigarettes, cars, resin, plaster, neon lamps and light fittings. The grungy, abject appearance of many of her works belies the serious and complex subject matter they address. She makes constant reference to the human body, questioning gender definitions and challenging macho culture. This approach is encapsulated in the classic Two Fried Eggs and Kebab 1992, in which a reclining naked female body is constructed from a table with two eggs and a kebab, and Au Naturel 1994, consisting of a mattress on which an empty bucket and a couple of melons represent female genitalia while the male is represented by a cucumber and a pair of oranges. 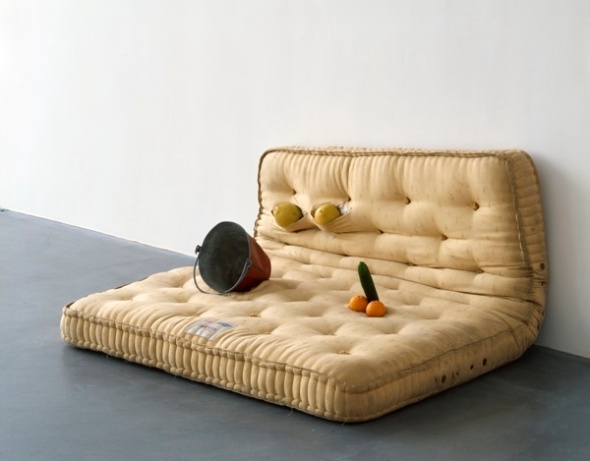 These are the techniques of the Japanese mitate – one thing standing in for another in order to obscure meaning and make light hearted allusions. But given the context of a publicly funded gallery, these works are also designed to alienate and to enrage the wider audience and to make knowing and sardonic connections with a mainly bourgeois minority of collectors and art professionals. There are two sorts of dialogue here – one is populist and broadly anti-establishment, the other hermitic, elitist and establishment-friendly – hence the tremendous moral outrage of the excluded art lovers of England. Lucas’ piece Au Naturel (its use of French, even, in the title), denigrates urban sexual relations with a brash, lofty cliche. Hers is an image of underclass machismo, (the commonplace mattress), and compliant women – the vagina reduced to a bucket, which denies, without knowing, the potential pleasures and enthusiasm that ordinary people have for sex.

The dialogue that exists between artists and audience is always problematic. With the exception of still life and landscape (and even these genres benefit from Marxist dialectical interpretation), art needs codes of interpretation for it to have meaning. How intelligible these codes are dictates who is privy to the dialogue and who is excluded. Ukiyo-e existed through the network of private patronage and popular support; contemporary art exists because of the open patronage and approval of the state. That this endeavour should use a language designed to exclude the populace who are in effect paying for it and who are also the butt of many of its jokes, leads to an understandable and yet regrettable lack of dialogue with the wider public.