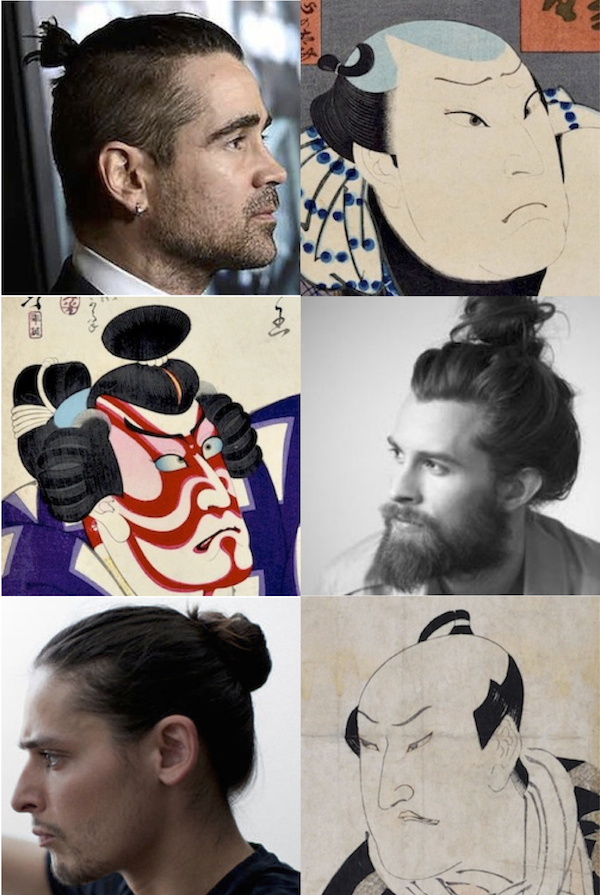 I was intrigued by the gushing of the press for the current must-have hair-do, the ‘man-bun’. Dealing for years in Japanese prints, I get used to people asking me why the hairstyles of the figures in these Edo prints are so strange and so comical. It seems that contemporary fashion has caught up with the samurai cut of choice. The Chonmage, as it is properly called, originated in Japan in the middle ages – the period of the warring states. It can’t be said for certain, but it is assumed that the hairstyle, which was shaved at the front, kept long at the sides and back and swept up to form an oiled bun at the back of the head, developed as a way of securing the decorative battle helmets. The truth is that after the period of Japanese civil war, the samurai had little else to do and homages to their previous, martial incarnation were common as a way of invoking their glorious past. It was thus a serious offence for someone not of that class to wear this particular style of hair design. 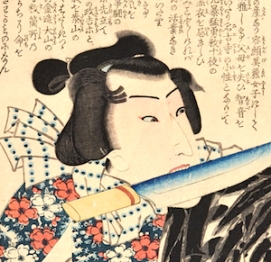 As the heroic role of the samurai waned, it became more common for other sectors of Edo society – the otokodate for example – to wear a variant on the elaborate oiled bun of the ‘superior’ class. This style, shaved front and ragged bun, became de rigeur for sumo wrestlers and it is primarily from this source that the current trend seems to derive. The new fashion, as worn by stars such as Orlando Bloom and Harry Styles, tries to emulate the casual effrontary of a potentially effeminate style with a confidant masculinity – with varying degrees of success. It is for the moment, as even the British Guardian Newspaper   describes it:

Straddling both masculine peacocking and historically feminine hair length, the man-bun wearer knows that he is inviting the heteronormative female gaze – and he doesn’t shy away from the glances of gay and bisexual men.

Or, in the headline of the same article:  “Man-buns are the sexiest thing in the world”. This is why they drive us wild . For a slightly longer explanation of variations on this theme, see Japanese Hairstyling in History elsewhere on this blog.