The celebrated international artist Christopher Bucklow is well known to followers of the Toshidama Gallery. The artist is currently celebrating a lifetime retrospective of paintings and photographs at the Southampton City Art Gallery in England. Toshidama Gallery director, Alex Faulkner has long been a collaborator with Bucklow, on joint exhibitions as half of the fictional duo Dimitri & Wenlop, and now as author of the lavish catalogue that accompanies the exhibition.

Before the final hang at Southampton. Foreground, Peel, Oil on Canvas. 2013

The show brims with exhilirating references to the ukiyo-e prints of which Bucklow is an avid collector. Outstanding among these though, is a recent painting; The Moon’s Inner Vision from 2016. (top).

The Moon’s Inner Vision exemplifies many of the themes which dominate the paintings in this huge exhibition. As with many of Bucklow’s recent works, the picture respects the living space of each group or single figure – there is a single canvas dedicated to each set. This device, this way of dividing the picture, is a nod to the ukiyo-e tradition of the nineteenth century, whereby kabuki prints especially were sold either as individual sheets or in multiples of two or three… the final design being more frequently conceived as a panoramic triptych. Of course, the idea was that the avid fan could save money by not purchasing the prints of his less favoured actors. I suspect Chris Bucklow might not be open to such an offer on this particular work!

Central to the piece is the enigmatic figure above which is derived from two sources, the first, a print by Kunisada of the Ghost of Oiwa from a triptych depicting the actors Ichikawa Ebizô V as Tamiya Iemon on the right and Onoe Kikugorô III as the Ghost of Oiwa in the centre.

Bucklow has transformed the figure. In kabuki dramas,  Oiwa is the hapless victim of her miserable husband and his scheming lover. Interestingly, she is always depicted as the disfigured monster that was her fate before her murder. Kunisada here chooses to show her as a great beauty. Bucklow has transformed… rescued, even, Oiwa and turned her into a Madonna, a Mary. The magical transformation is effected by splicing (grafting) Kunisada’s Oiwa onto the outstanding painting by Paul Gauguin, Ia Orana Maria, (Hail Mary). Bucklow has decorated his Oiwa with the rich Tahitian colours and the specific vegetation of the exotic and living Gauguin…

I want to break off here and talk briefly about grafting, (vegetation in fact). Bucklow’s very earliest mature work was exhibiting unlikely, grafted hybrids of commercial or household plants. The works themselves were plant forms that he had either altered genetically or otherwise combined by grafting species together. (Hyacinthus Orientalis at Selborne, Dianthus chris eubank, Potato-tomato plant, Pear-hawthorn graft, variously shown in 1993 at the Lisson gallery, London and in 1996 at the Museum of Modern art in Oxford).

His practice of combining; colliding disparate things to create surprising and new objects has its basis in these plant based works which became a constant through many of his ideas and his made pieces, photographs and latterly, paintings. This fertilisation, is unpredictable, fecund, and bountiful. As in this hybrid painting where the vegetation is Gauguin’s, and the stem is Kunisada’s it produces a hybrid ‘Mary’. A mother Godess figure, the Dream Sender, the Queen of Heaven, the Repair between East and West. It is the central figure that links, via the spirals of tarot cards, the bound figures in the left panel with the ominous, Balzacian figure that towers in the right.

The bound figures in the left hand panel are derived from a William Blake print, Vision of the Daughters of Albion…. Bromion and Oothon: 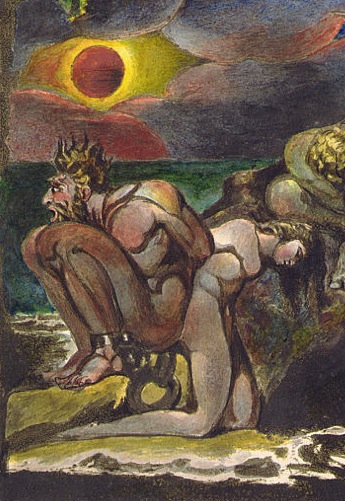 William Blake, Blake’s Vision of the Daughters of Albion…. Bromion and Oothon.

They represent an aspect of the artist in a dream, as does the ‘released’, combined form on the right, itself derived from a 2016 painting by Bucklow in the exhibition called The Repair.

There is a lot to take in here. The painting is enormous… over five metres long. The central panel, this hybridised Mary figure… a distant echo of Gauguin, of tragic, (rescued now) Oiwa, and even another figure in Bucklow’s pantheon, Eliot’s Mm. Sostrisis. She is the Moon of the title, the visionary, the repairer and the soothsayer.

Oothon, one of the suggested figures on the left is of course another version of Oiwa and her doomed but vengeful husband. Oothoon, (the female) is in love with Theotormon, who represents the chaste man, filled with a false sense of righteousness. Oothoon desires Theotormon but is suddenly, violently raped by Bromion (pictured above). After Oothon is raped neither Bromion nor Theotormon want anything to do with her. Oothon and Oiwa are similar, aren’t they? They are both  victims of the rage and passion of men. The powerful figure in the centre of the picture, the Dream Sender, restores and repairs the balance… the yin and the yang, if you like. The figure on the right, the repaired lovers,  reveals the longed for truce which eludes us all. 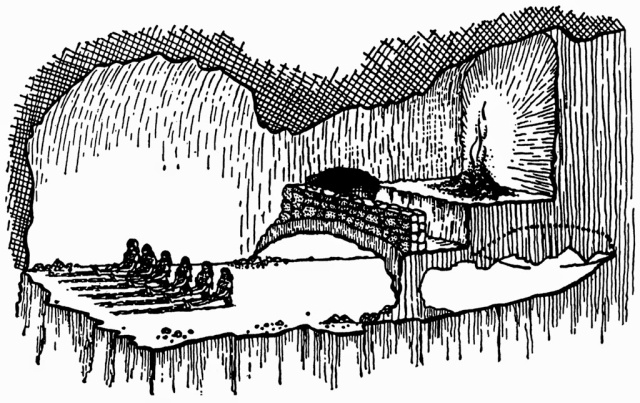 Illustration of Plato’s Allegory of the Cave

A further twist is the relationship that Blake made implicit in his print of Bromion and Oothon with the often repeated allegory of Plato’s Cave, (illustrated above). Blake used Plato’s Allegory of the Cave in Visions of the Daughters of Albion as a theme for the three characters not being able to understand the true nature of reality, without being hindered by convention. By coincidence, the title of the catalogue essay for Bucklow’s retrospective is Bucklow’s Cave. It argues that the artist uses Plato’s analogy as the primary motivation behind the making of his work, as for Bucklow, the real drama takes place behind the screen.

Christopher Bucklow, Said Now and For All Time is at Southampton City Art Gallery until 13 January 2018.