Toshidama Gallery is showing a selection of fabulous prints made by the Osaka woodblock artists of the mid-nineteenth century. The show runs from October 2017 for six weeks and all of the prints are for sale.

I think that for me as the gallery director, my favourite prints, (my love if you like!) is for the discreet and tragic beauty of this Osaka School of woodblock artists. Even amongst those great works, spanning several decades, I think it is the mid century, the so-called second wave who are most mysterious, most daring and most impressive. Starting I guess with Sadanobu and culminating in the exotic and decadent works of Yoshitaki, these wonderful jewel like prints suggest a prescience and tragedy… a melancholy that is both technically accomplished and restrained… moving and tragic. That these artists could work so freely within such tight constraints imposed by the government censors (post 1842 and most harshly administered in Osaka) and within the smaller chuban format is nothing short of miraculous. 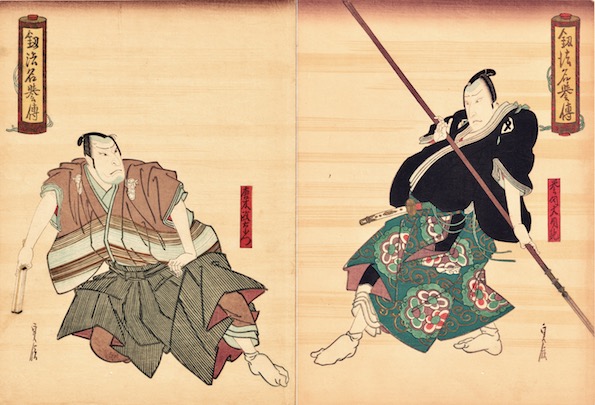 The earliest prints in the show are on the larger oban format – the marvellous Ashiyuki portrait of Arashi Rikan II as Mashiba Hisatsugu, from 1830 and the Yoshikuni portrait of the kabuki superstar of the century Nakamura Utaemon III from 1821. For two decades at least nearly every print went either unsigned or unnamed and on the chuban size paper… to avoid censorship but one can’t help feeling that these small prints may have been passed around from one discreet sleeve to another in quiet corners of tea houses! 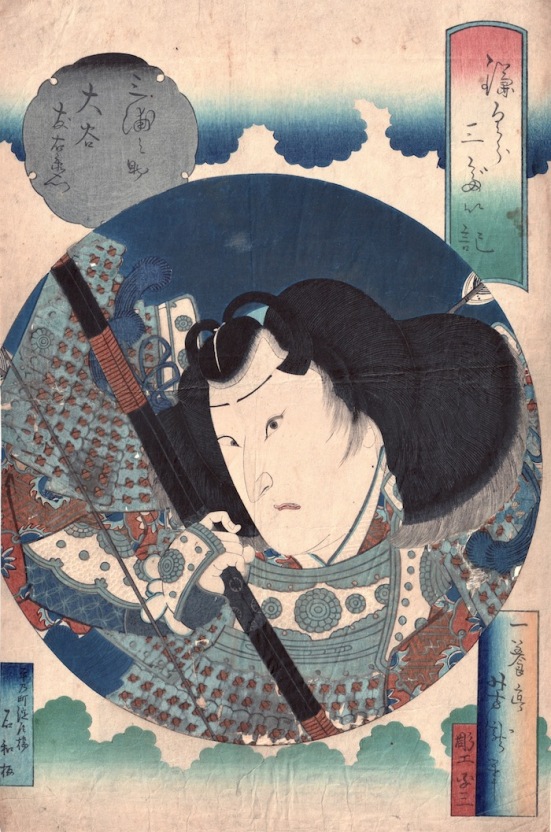 We don’t see a return to the larger format until the end of Osaka print production with a few of the outstanding okubi-e and large portraits by Yoshitaki. My favourite print in the show, despite soome age damage is Yoshitaki’s masterful print of an actor as Yoshitsune, a print that is so confident, so deft, so brilliantly coloured as to be breathtaking. 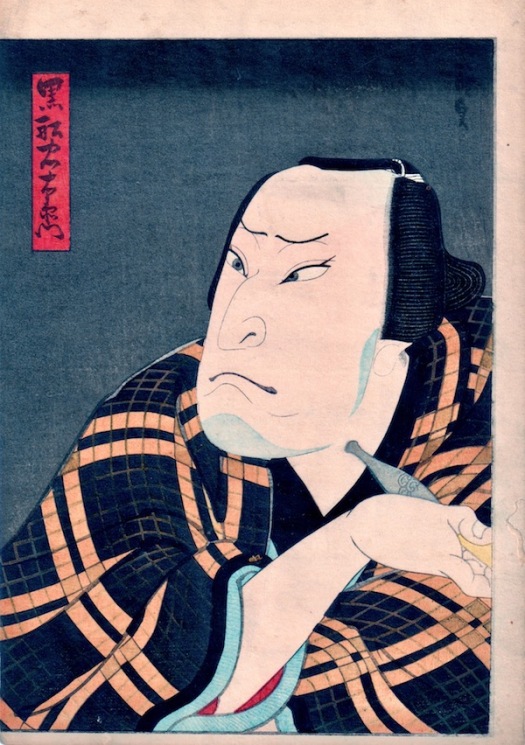 Elsewhere, as the show opens we have five consecutive pages of chuban portraits, each one so similar but each one so engagingly and profoundly original. I wanted them to all be laid out together, as a group. This is woodblock printing at its very best, anytime, anywhere in the world. These prints bristle, sparkle and crackle with colour and texture, with line, shape and symbol and seethe with barely contained melancholy and writhing emotion… each one a minor miracle. Multiply these small miracles by three and we have some of the astonishing Osaka triptychs, like exquisite jewel boxes that are opened out on the page, each one a three act drama revealed as each sheet unfolds. Especially notable is the lake side scene of Nakamura Utaemon IV as Matsuemon in Act 6 of Seisuiki from 1851. The waves, the pine tree, the astonishing embossed drawing of the figures a virtuoso performance of the art of woodblock. Imagine what these prints must have felt like when they were fresh from a back street workshop, possibly illegal, certainly daring, as they were unwrapped from rice paper envelopes and their shiny burnished details caught the light of the oil lamps.

I hope I can communicate to you some of the enthusiasm I feel, personally towards these prints. They are absurdly cheap. The market is slowly catching up to the genius of Osaka but predictably the market must start with the oldest items first!

It is possible to purchase, to own and to display a work of art that is more usually seen behind glass in a museum, for just a few hundred dollars in many cases. The prints on the site are all original, first editions unless otherwise stated and usually of museum collection quality. Wherever  it is appropriate, we supply links to other copies in major collections.

For a copy of our newsletter and a discount on all prints in the show, please do click HERE