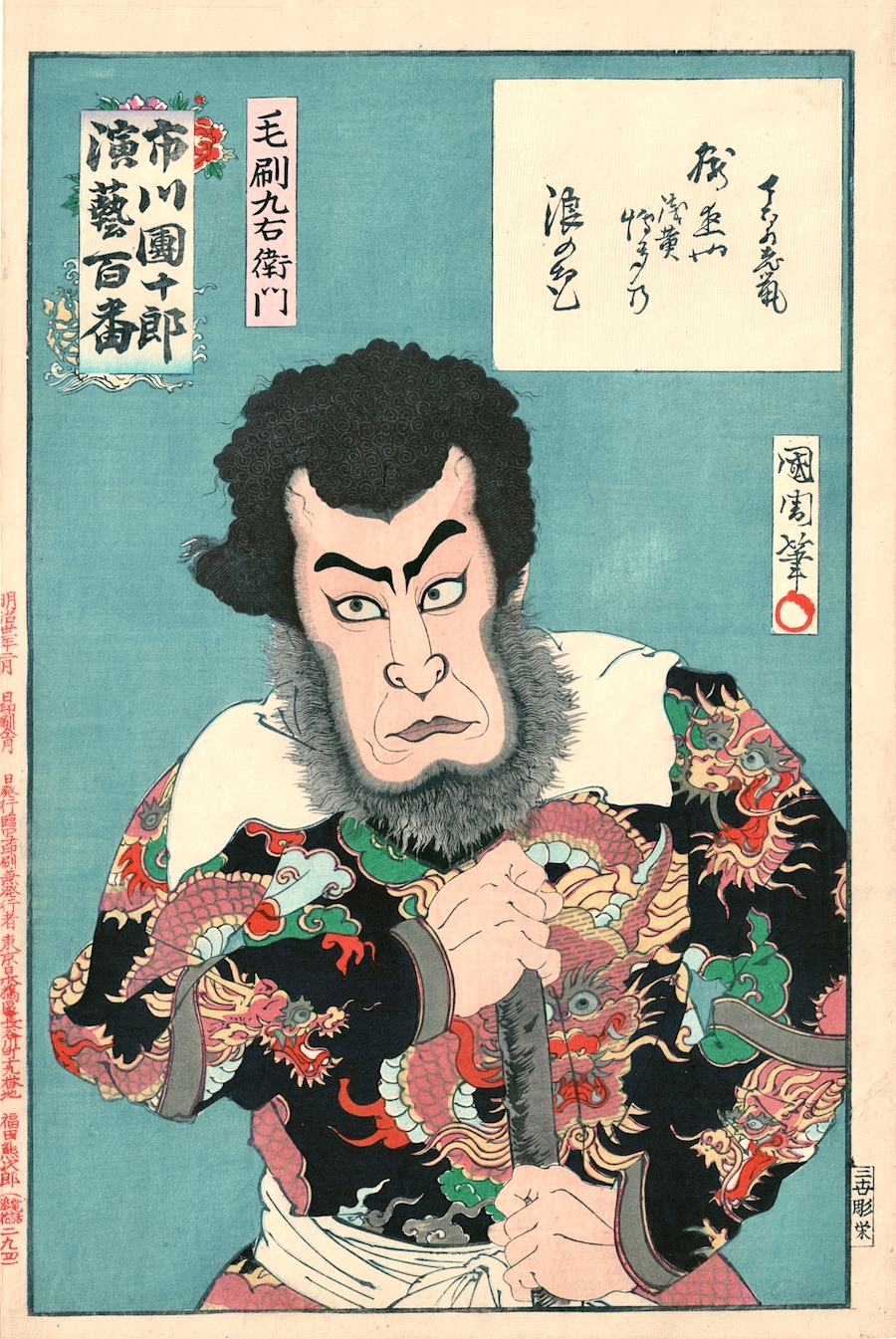 What an amazing image this is… its a fabulous woodblock print by the nineteenth century artist Kunichika and it depicts the great actor of the kabuki theatre, Ichikawa Danjuro IX as the Pirate Chief Kezori Kyuemon from the play, Hakata Kojorô Nami Makura. The role became synonymous with Danjuro, who made the grand styling of the final pose of Act 1 his own. This typical bravura is what Kunichika captures here in this terrific, unique portrait… a great masterpiece in fact of kabuki portraiture.

The play is derived from a true story and concerns the travails of the merchant Soshichi, travelling by boat to Kyoto. He is aboard the (unbeknownst to him) pirate boat commanded by Danjuro’s Kezori. It is this extended first act which gives the play its drama. The stage is a great cloth ocean and the boat pivots against it, turning to and from the audience. The special effects and Danjuro’s outrageous performance are the attraction. Well, Soshichi witnesses the smuggling, is thrown overboard, but makes it to his date with his prostitute lover in Kyoto and becomes one of Kezori’s gang, his girlfriend pledging him her love. The cartouche on the right hand of the print reads: the colour of the waves at Hakata is light blue.

The play was hugely popular and is still performed in Tokyo to this day… strangely to western eyes starring a descendant of Danjuro’s also called Ichikawa Danjuro. The picture below is another rendering of the play, this time by the artist Kunisada. This woodblock print is from 1852 and is in the collection of the Museum of Fine Arts, Boston.

The story is actually based on the events of a succesful merchant, Ito Kozaemon who became rich through illegal smuggling operations and was, as in the play, found out by chance. Kozaemon was executed despite being the most important merchant in that part of Japan.

The Kunichika portrait is on sale at the Toshidama Gallery for £300. There is a 10% discount for gallery newsletter subscribers this month. The print is in outstandingly good condition, very clean and very fresh… the surface is richly and thickly coated in mica and the paper is deeply embossed with textures… it’s a fabulous thing, a great design and phenomenal print quality.