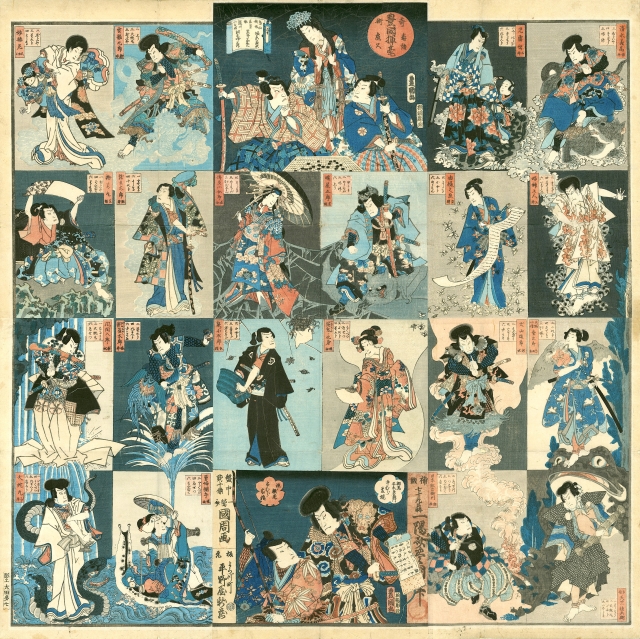 Toshidama Gallery has been fortunate to acquire a very fine, six sheet  sugoroku print of Supernatural characters by Kunichika from the late 1860’s. The print will go up on our website at the beginning of July, but the piece itself is such a good compendium of Japanese magicians and stories that it seems a good opportunity to look at the individual stories as they appear here. Over the next week or two we shall look at the deeds of the most famous of these heroes and heroines of the kabuki stage and the old folk tales. Of course, lots of these names appear in modern day manga and anime games and cartoon strips.

The kabuki plays from which this derives its subject matter were a mix of traditional folk tales, novels, epics and heavily embroidered accounts of recent events. Despite the fact the these were expensively produced and drawn by the leading artists of the day, these board games were popular objects, designed to be played with… hence in fact very few survive and notably not in this condition.

The game is played in a similar way to western snakes and ladders. A dice is thrown and players are moved about the board. The rules to some of the many variations of the game are now lost, as indeed are many of the minor roles and characters that appear in the windows. The design is a sophisticated series of collaged scenes, giving the appearance of a vertical stage whereby the actors can interact with each other. Hence looks are exchanged left and right and up and down but in fact the personalities are separated – sometimes by centuries and by authors, spaces and settings, real life or imagined. What unites all of them is the influence of the supernatural world.