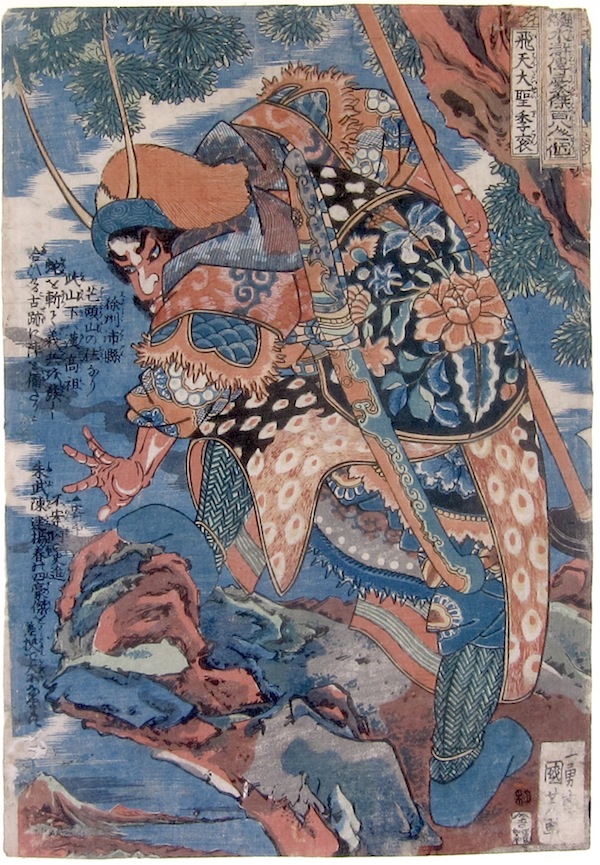 Once upon a time, a long time ago, there was (perhaps) a great warrior, one of a great band of men – legendary, brave, skillful and outlawed – who saved China from invasion, who righted wrongs and stood up for the poor and oppressed. This great warrior lived in the 12th century, his name was Li Gun and he was also known as Hitentaisi Rikon. A picture of him by Kuniyoshi is reproduced here at the the top of the article. Kuniyoshi’s portrait of Li Gun was drawn in 1827; by then Kuniyoshi had no more idea of what Li might have looked like than we do.

His image, along with the rest of the series depicting the other warriors made Kuniyoshi famous. The novel from which they were drawn, Heroes of the Water Margin (in Japanese 108 Heroes of the Popular Suikoden), was already popular in Japan but it was Kuniyoshi’s depictions, and especially his decision to cover the heroes’ bodies with intense and sometimes livid tattoos that caught the public imagination and started a craze for full suit body tattooing that is more popular today, across the whole world than at any other time.

In Japan, there was no great tradition for this kind of body decoration in the 1820’s. After the publication of the Kuniyoshi series it became hugely fashionable for street toughs, firemen and even some samurai to adopt the designs of mythical creatures or warriors in action, struggling with giant snakes or wielding clubs and katana. Over the decades Kuniyoshi’s appropriation of the Suikoden heroes as tattoos has become an accepted art form in its own right. To some, these designs are the preserve of the Japanese Yakuza – the mobster Gangsters of the Tokyo suburbs, but to others these patterns and visual displays are part of a recognised, sophisticated culture of their own.

Outstanding in this field is the artist whose work is

pictured here. His blog, True Nature Tattoo shows how outstandingly ukiyo subjects can translate to another medium. For me these tattoos continue the spirit and the sense of the ukiyo style far more than contemporary or twentieth century woodblock prints do. Certainly the execution, the depth of colour, the quality of the lines and the gesture of the nineteenth century signature is extraordinary. But there is something else; spirit maybe, that elevates these tattoos above mere copies of existing artworks. There is a depth and authenticity to them – perhaps because rather than in spite of the process of translation. There is a beautiful circularity  here – Kuniyoshi representing tattooed heroes, and these illustrations working themselves back onto the skin in a living, three-dimensional form. There is also a superb eclecticism in the choice of subject matter, as in some late nineteenth century floral motifs from Keika Hasegawa, tossed on deep blue ukiyo-e waves. 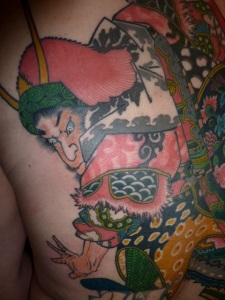 But it is the Kuniyoshi portrait of Li Gun that attracts me here. Toshidama Gallery is currently showing this print as part of our September exhibition and here it is, huge and brilliant on someone’s back; alive, as it were; rippling with muscle and motion. What an astounding image this is; the figure resembles a gigantic insect, the helmet sprouting antennae like a mantis and the shield on his back seeming to be like the carapace of an enormous ladybird or beetle. Even his pose – crouching on a crag, scanning the horizon, has all the qualities of a predatory spider. Yet this is also the portrait of a great warrior. I wonder how the client in the photographs identifies with this piece, perhaps just with the enigmatic image or maybe with the legend of the warrior about whom so little is known.

Tattooing is a persistent theme in ukiyo-e and we will keep returning to it from time to time; whether it is the firemen of Edo, or the gangsters of modern Japan or simply these superb, translated designs which more than anything I can think of, keep the visual language of this very great art alive and relevant.

Toshidama Gallery is exhibiting the Kuniyoshi portrait of Hitentaisei Rikon (Li Gun) in 4×4: Giants of the Ukiyo-e Scene until 4th November 2011. The original print is available for purchase for £850.00.