It is so easy to miss what’s going on in Japanese prints – sometimes just looking hard isn’t enough. There are two prints on this page, one is of a female warrior battling a man and the other is of a male warrior doing the same thing. Surprisingly – they both

Kuniyoshi, The Fight on Gojo Bridge

look very like each other. The print on the right represents the young hero Yoshitsune-no Minamoto in his famous fight with the giant monk Benkei on Gojo Bridge. The print at the top of the page represents a female warrior of a similar period Tomoyoe Gozen fighting with (and most likely decapitating) Musashi Saburoemon Arikuni. The source for these characters is the Heiki Monogatari, an epic poem written by collaboration from oral traditions in the fourteenth century that describes the bloody wars of attrition between the Minamoto clan and the Taira clan in the twelfth century.

The picture of the famous heroine Tomoe (as she is more commonly referred to) Gozen is by the great Japanese print artist Kuniyoshi and dates from 1840. It is very much in the tradition of warrior print that Kuniyoshi more or less established in the 1820’s. The bodies of the two fighting characters seem to be so entangled that they have become one entity – a two headed beast of indeterminate shape, overwhelmed by pattern. He has pictured the defeated Musashi with the conventional bulk and facial hair of a great samurai. Tomoe is similarly attired in the bulky wood and leather armour of the period but has the features of a youth. So what do we know about this enigmatic warrior heroine?

Tomoe was an onna-bugeisha, a type of female warrior, although it is misleading to call them female samurai. Prior to the late Edo period it was common for women to fight alongside men in battle and in the defence of communities. This role is greatly at odds with contemporary positions of women in Japanese society and does not chime with western ideas of compliant Japanese females. The Tale of the Heike describes Tomoe thus:

Tomoe was especially beautiful, with white skin, long hair, and charming features. She was also a remarkably strong archer, and as a swords-woman she was a warrior worth a thousand, ready to confront a demon or a god, mounted or on foot. She handled unbroken horses with superb skill; she rode unscathed down perilous descents. Whenever a battle was imminent, Yoshinaka sent her out as his first captain, equipped with strong armor, an oversized sword, and a mighty bow; and she performed more deeds of valor than any of his other warriors. 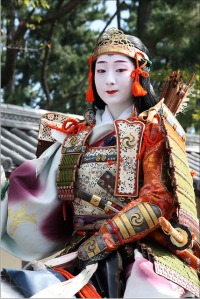 In the history of the clans, Tomoe was the concubine of Minamoto no Yoshinaka, an ambitious samurai who desired to be leader of the whole Minamoto Clan (it is problematic here to define the word concubine. Mistress is probably a better word, since prostitute is perhaps too harsh and wife doesn’t accurately describe the relationship). His cousin Yoritomo resented his grab for power and despatched his brothers to kill him. Yoshinaka was eventually defeated at the battle of Awazu in 1184 where Tomoe Gozen took at least one enemy head. Yoshinaka ordered her to flee and the chronicles report that she became a nun in Echizen. With reference to the two pictures here, the second print shows the youthful Yoshitsune-no Minamoto, one of the brothers despatched by Yoritomo to kill Yoshinaka and he is credited with the victory and the assassination.

Tomoyoe lived on in the chronicles of the Heike and was especially popular during the late Edo in Japanese prints and stage dramas. Perhaps in some part, this was a subtle criticism of the feudal system that ruled Japan from the time of Yoritomo until 1868 – she fought on the side of the defeated Emperor after all. More recently, she is the lead character in a  popular trilogy of novels by Jessica Amanda Salmonson published in 1981 set in an alternate universe similar to feudal Japan.