The Pachyderm in the Room – Kuniyoshi’s Elephant

The elephant has long presented artists of all genres with a problem. The elephant is exotic, clearly enormous and spectacular but in captivity it lacks the dynamism, the heroism that its reputation suggests. Very few artists have successfully represented the elephant and because of the sheer size of the animal, the great difficulty in transporting it, and before the advent of public zoos in the nineteenth century, very few people had direct access to them. The elephant has fared badly in the history of art; in Japan where the elephant assumed great importance in the adopted religion of Buddhism, the elephant was only briefly seen in the flesh until only a hundred or so years ago. It has nevertheless been important to picture it in order to complete certain apocryphal series such as The 24 Paragons of Filial Piety, a popular subject amongst ukiyo-e audiences.

Gesner, Engraving of an Elephant, 1551

It is fair to say that the Kuniyoshi attempt at an elephant (pictured above) is most probably the result of research from different sources than from direct experience. The precedents that he would have had would almost certainly have included the large number of Dutch engravings that he is known to have collected. Even these would have been unreliable, many such examples showing scant knowledge of exotic creatures such as whales, rhinoceroses, giraffes or elephants. Worse still is an example he would have been very familiar with, Hokusai’s Blind Men Examining an Elephant. This famous piece is from the 1818 volume 9 of his multi volume Manga Sketch series of books. In it is illustrated this Buddhist parable of a king asking a group of blind men to examine an elephant and report to him what the creature was like. Of course each man describes a different thing; one feels the tail and professes the elephant to be like a rope, another the side  which is like a wall, another the trunk which he describes as a snake and so on. The parable is concerned with illustrating how we each see the world according to personal experience rather than universal truth; however in this case it serves to neatly describe the problem Kuniyoshi may have faced when turning to illustrate the creature itself.

Both the Dutch engraving and the Hokusai illustration lack skeletal structure; they fail to convince us of the mass of the creature; the weight, the bulk and the solidity of its body. The Hokusai, especially, is too bag-like, the Dutch example too inflatable. Kuniyoshi’s response in 1840 is an attempt at solidity – Hokusai’s formless and excess skin is gone, and yet there remains something of the elephant inflatable about the drawing. In Buddhism, the elephant represents solidity (obviously) and when pictured in white, (as here) the ability to overcome obstacles and obstructions with self belief and inner strength. Despite fumbling with accuracy, in this print Kuniyoshi has drawn the elephant with those Buddhist characteristics.

The fable illustrated is from an old Chinese collection of stories written by the scholar Guo Jujing recounting twenty-four acts of kindness by sons and daughters. In this case the virtuous Emperor Yao was seeking an heir to his kingdom and was told about a young man who was terribly abused by his stepmother’s family yet continued to tend the fields tirelessly and singlehandedly. He is assisted in this by the elephants and the birds: 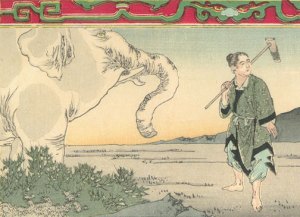 The elephants come down from the mountains to plough the furrows for this young man; in the Spring you can see them line up and use their tusks to dig the earth. In the Summer the crows and magpies flock down to pull up the weeds with their beaks. Nature itself approves of his righteous attitude, especially in the face of hardship, as in the case of his impossible family situation.

The Emperor was so moved by the story that he granted the kingdom to the young man. Chikanobu fares little better than Kuniyoshi in his treatment of the same subject of 1890. An example, though, of how direct observation (of the whole animal!) can lend

authenticity is the picture by Yoshitoyo of an elephant in Japan being prepared for a parade. Whilst the creature still seems to owe a debt to Kuniyoshi’s precedent, the gesture, the convincing way that the animal grasps the straw and the focus of the eye suggest an intimacy born of first hand experience.

6 Responses to The Pachyderm in the Room – Kuniyoshi’s Elephant