Hokusai, A Cuckoo and Rainbow

For those familiar with, or interested in Japanese woodblock prints, the image of the falling cuckoo (above) will perhaps be familiar but perplexing. This enigmatic bird, drawn identically each time, appears in woodblock prints from the early 1830’s right into the twentieth century. The bird is sometimes (as in the case of the Hokusai) the star of the show, sometimes a symbol and occasionally a seeming afterthought – filling in an aching gap in the page. 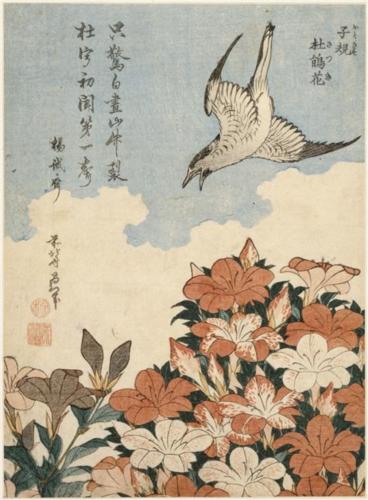 The cuckoo (Cuculus poliocephalus) – or hototogisu has several meanings in Japanese folklore but its use in these prints appears to be transient or elusive – much like the bird itself. Unlike in the west where its song heralds the arrival of spring, in Japan the cuckoo is associated with the coming of the summer months. The cuckoo has long been popular as a subject in Japanese literature and Haiku, possibly to do with the word having five syllables; and in literature and myth it is associated with the longing of the spirits of the dead to return to their loved ones. Mourning, longing, melancholy; these are suggested maybe by its song and perhaps signals its persistent use in woodblock prints. 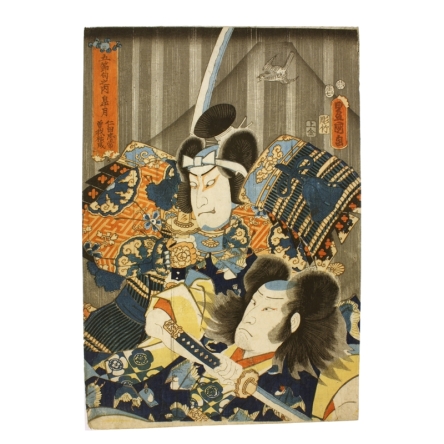 Elsewhere, particularly in literature, the cuckoo has borne other symbols – as in the well known story of the three warlords Oda Nobunaga, Toyotomi Hideyoshi and Tokugawa Ieyasu. Ieyasu eventually became shogun and first unifying leader of Japan in the sixteenth century. There is a traditional senryu, or short poem, which is used to illustrate the virtues of patience. It says that one day Nobunaga, Hideyoshi and Ieyasu got together and they saw a cuckoo that wouldn’t sing. Nobunaga said, ‘If it doesn’t sing I’ll kill it.’ But Hideyoshi said, ‘No; I’ll convince it to sing;’ and Ieyasu said, ‘I’ll wait until it sings’.

More commonly the bird is used to animate landscapes, to deal with the blank spaces on the page; the placement being a decision of great aesthetic importance when used successfully as in the Hiroshige print Komagata Hall and Azuma Bridge, from the series One Hundred Famous Views of Edo (right). Here the falling cuckoo is also used to imagine the oncoming storm and the melancholy of the windy night.

Kuniyoshi, Comparison of Birds and Flowers 1835

It seems that the original drawing for this often used motif is by Hokusai in around 1830 – 1834. The motif is swiftly used by Hiroshige in a quarter block print from the mid 1830’s, in his Parallels for the Tokaido series of 1846 and again in the Views of Edo from the late 1850’s. Kunisada uses the same cuckoo in several theatre prints in the 1840’s and 1850’s and Kuniyoshi borrows the same drawing for a Bijin series comparing flowers and birds in 1835 (left) and for Poems set to the Koto in 1840. The same drawing of the cuckoo surfaces again in the Meiji with Yoshitoshi who uses its melancholy associations in the famous vertical diptych, Genji in the Countryside from 1885.

What all these examples show is the collaborative nature of Japanese woodblock printing. An artist was able to manufacture an image that could become the standard drawing for that subject for generations of other artists and contemporaries. There was little sense of ownership, copyright or proprietorship – and whilst there was certainly rivalry between artists, the casual borrowing of standard images was considered completely acceptable.

4 Responses to The Enigmatic Japanese Cuckoo